Bitcoin has rocketed higher over recent weeks. In the past five weeks alone, the leading cryptocurrency has gained 60%, boosting to $16,600 as of this article’s writing. Earlier today, the coin was trading higher than this closer to $17,000.

Analysts are confident that further gains are on the horizon.

According to Mike McGlone, a senior commodity analyst or strategist at Bloomberg Intelligence, Bitcoin passing its previous all-time high at $20,000 will cause a large move higher.

Referencing the chart below, he went as far as to say that the cryptocurrency passing $20,000 per coin could trigger a move to a $1 trillion market cap for all Bitcoin. This corresponds with approximately $50,000 per token, a price 200% higher than the current price point of $16,600.

Commenting on what the chart shows for Bitcoin, McGlone wrote:

“$20,000 #Bitcoin Is Primary Hurdle Toward $1 Trillion Market Cap — The digital version of #gold but with more-limited supply and a history of adding zeros, appears to be in an early price-discovery stage and may simply continue its ascent in 2021. Mainstream adoption is rising…” 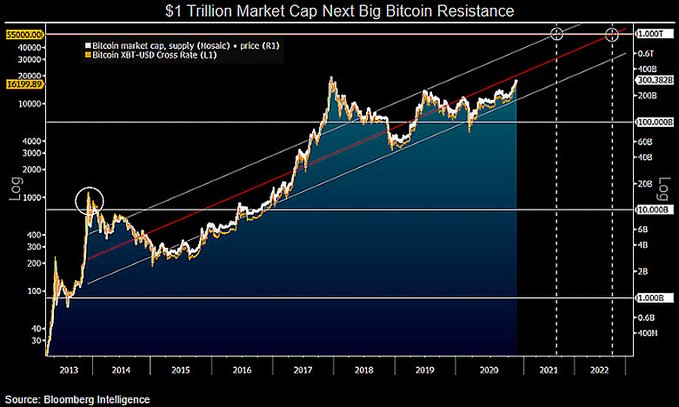 Analysts think that Bitcoin moves beyond $50,000 in this market cycle, despite how impressive a rally to $50,000 would be. The Winklevoss Twins, the co-founders of Gemini and long-time BTC holders, recently stated that the cryptocurrency could pass $500,000 per coin in this market cycle:

“Inflation is coming. Money stored in a bank will get run over. Money invested in assets like real estate or the stock market will keep pace. Money stored in gold or BTC will outrun the scourge. And money stored in Bitcoin will run the fastest, overtaking gold… Nonetheless, we believe that BTC will continue to cannibalize gold and that this story will play out dramatically over the next decade. The rate of technological adoption is growing exponentially. Software is eating the world and gold is on the menu.”

Other bulls include Raoul Pal, CEO of Real Vision and a former hedge fund manager. Pal recently stated that the cryptocurrency could hit $1,000,000 in this market cycle alone due to institutional inflows.

Even Citibank analysts are hyper-bullish on Bitcoin. An analyst at the bank recently stated that the cryptocurrency could surmount $300,000 in this market cycle.