Bitcoin is currently caught within a firm short-term uptrend that has allowed it to post some notable gains. Its latest upswing led it into the mid-$9,000 region, where it now appears to be finding some resistance.

Whether or not it climbs higher in the near-term, however, could largely depend on how it reacts to these levels.

Multiple analysts, however, are noting that the crypto is fundamentally strong, and could be well positioned to see significantly further near-term upside.

One analyst in particular believes that it will continue rallying higher until the first week of June, around which time it will begin losing its momentum and declining lower.

At the time of writing, Bitcoin is trading up just under 3% at its current price of $9,400. This marks a notable climb from yesterday’s highs of $9,250.

The crypto now appears to be pushing up against some heavy resistance. If it is unable to climb from here and faces any sort of swift rejection, it is likely that it will decline back to $8,800.

This is the level at which its ongoing uptrend first started at, as the defense of this support bolstered buyers and helped catalyze some momentum.

How BTC trends in the near-term will likely be determined by its reaction to the resistance just above its current price level.

Two of Bitcoin’s key moving averages also exist just above where it is currently trading. One analyst believes a firm break above these levels could open the gates for a climb to highs of $9,800.

One potential path forward for the benchmark cryptocurrency is that it will continue rallying until early June, at which time it will lose its strength and decline back towards $9,000.

Another respected analyst put forth this possibility in a recent tweet, offering a chart showing that BTC may push as high as $9,800 before declining.

“Previous plan was to short $9350s but this isn’t showing any weakness yet and I’m starting to think a scenario like below is likely to happen. Looking for this to get topped out 1st week next month,” he explained while pointing to the below chart. 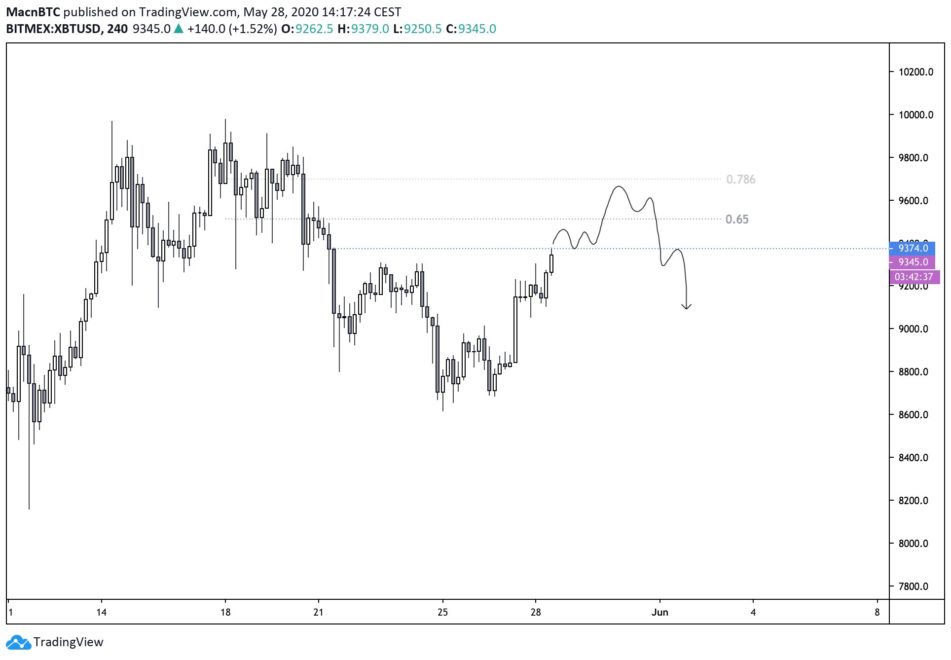